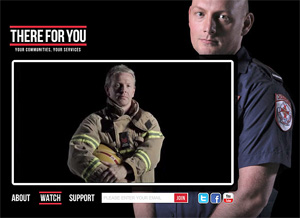 Australia
Vic: There for you
Victoria's Public Sector Unions launch the There For You campaign. Firefighters, nurses, teachers, child protection and disability workers, paramedics, scientists and hundreds of other professions tackle government cuts.
Watch the campaign promo and the ABC News report.

WA: Crackdown on bushfire arsonists
A recent report by the Australian Institute of Criminology found that WA, which is already reeling from the disastrous accidental Margaret River fires of last week, has the highest incidence of suspicious and deliberate bushfires in the nation.
Fumbling Ministers grilled over bushfire.
$4m 'aerial intelligence' chopper to fight rural fires.

WA: Bushfire like flying into hell
The fire, which escaped from a prescribed burn in the Leeuwin-Naturaliste National Park destroyed 25 houses and nine holiday chalets.

NSW: More consider firefighting as a career
More than 6000 people are expected to apply for one of 70 new positions with Fire and Rescue NSW.

UK: Firefighters join TUC day of action and anti-cuts demonstration
Firefighters will be joining with other public service workers from across Essex demonstrating in Chelmsford against other frontline cuts in vital public services and fighting for fair pensions for all.

USA: Report on SCBA facepiece lenses and thermal degradation
The National Institute of Standards and Technology (NIST) has released its final report on a study to determine at what temperatures and conditions self-contained breathing apparatus (SCBA) facepiece lenses melt or degrade. This has been identified as a contributing factor in some firefighter fatalities and injuries.

NZ: Union successful in court of appeal - strike action legal
The Court of Appeal has overturned a decision of the Employment Court which delayed the start of strike action by NZPFU members

USA: Exercise dangerous
Emergency medical service workers and firefighters experience the highest rates of injuries and deaths in the workplace. A study of Tucson, Arizona firefighters found that one third of all injuries were sustained during exercising, even though exercise is designed to keep employees in good physical shape to reduce the risk of injuries during work.