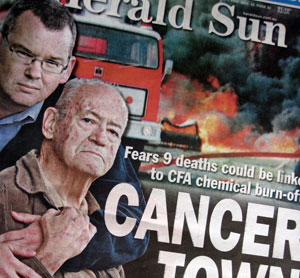 Links to media stories about firefighter and residents' exposure to carcinogenic chemicals used in training exercises at the CFA training centre in Fiskville, west of Bacchus Marsh in Victoria.

Baillieu to call inquiry
Premier Baillieu will order a full investigation of a suspected cancer cluster at Fiskville. And the United Firefighters Union said there was no way to deny firefighters had been exposed to cancer-causing chemicals.

Kids seek answers to dad's early death
Former CFA Fire Chief Brian Potter is worried he and his colleagues might have been exposed to cancer-causing chemicals.

Fiery questions need answers
The deaths at Fiskville are a matter of public conscience. Toxic chemicals used at the Country Fire Authority training town could be linked to cancers.

I was healthy before Fiskville
"I had to light all the fires and burn the chemicals as part of my job. I'd tip in 44-gallon drums and breathe in all those fumes, and I'd be in the smoke tunnel as well." Keith Hodge, 80, from Bendigo, was a pad supervisor at Fiskville from 1970-198.0

My family had a right to know the truth
Bronwyn Don lost her first husband, Robert Penna, to an aggressive cancer in 1997. He was a CFA instructor at Fiskville.

CFA failed to warn of dangers
The Victorian Country Fire Authority's alleged failure to tell past workers they had been exposed to cancer-causing chemicals at a training base may have cost lives, says a former CFA chief officer who has cancer.

CFA investigates Fiskville cancer claims
Victoria's Country Fire Authority (CFA) is investigating allegations that at least 17 people contracted cancer because of their contact with chemicals the authority used at its training centre west of Melbourne.

CFA cancer claims
"For 15 years now I wasn't sure what might have been the cause of my illnesses ...."

Fiskville cancer fears haunts south-west CFA veterans
Dozens of south-west firefighters are nervously awaiting investigations at the Country Fire Authority's Fiskville complex to determine if they could have been exposed to carcinogenic chemicals.

Country Fire Authority in cancer time bomb claim at Fiskville
"I have heard myself that Fiskville used to take chemical by-products from industry and use that for simulated exercises where firefighters would hone their skills for chemical spills."

'We heard a whoomph . . . a drum flew in the air'
Former CFA Chief Officer Brian Potter recalls his days at Fiskville with wife Diane at the memorial for killed firefighters.

Fire is not the only enemy
Fiskville is where about 40 people lived, and breathed in the fumes from these drums in the late 1970s and early 1980s. The Arab oil crisis had sent fuel prices soaring and the CFA used whatever would burn to train firefighters.

CFA failed to warn of dangers: ex-officer
He initially drew no link between the illnesses and their work at a CFA training base in Fiskville, western Victoria, where firefighters used to burn a range of waste oils, potentially containing chemicals such as benzene, toluene, xylene and phenol.

Ballarat fire chief's cancer fear after deaths linked to CFA Fiskville
However, Mr Pearce is pleased federal legislation has been introduced to help protect firefighters from certain types of disease.

CFA chemicals linked to cancer deaths
Victoria's Country Fire Authority stored cancer-causing chemicals 30 years ago that have been linked to deaths of firefighters.

WorkSafe acts as Fiskville cancer claim toll hits 15
CFA chief Mick Bourke says the organisation will do everything it can to support those who may have been affected by working at Fiskville.