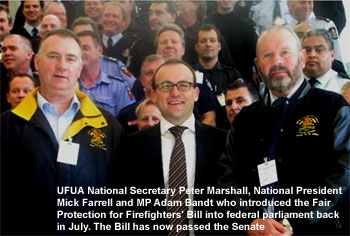 Easier compensation for firefighters with cancer

Firefighters who develop cancer will be able to access workers compensation more easily, under new laws passed in the Senate. Under existing laws firefighters have to prove they were exposed to a particular chemical on the job and that it caused their cancer.

A bill initiated by Australian Greens MP Adam Bandt to change the process won the support of the Lower House earlier this month before gaining rare tripartite support in the Senate today.

Exposure
Under the new laws, it would be assumed a firefighter's cancer was caused by their work and employers and insurers could reject a claim if they felt it wasn't worthy. It will apply to brain, bladder, kidney, breast or testicular cancer, non-Hodgkins lymphoma and leukaemia.

Quoting a study, Senator Wright said firefighters were routinely exposed to harmful substances including lead and chemicals. Harmful substances in smoke could still cause cancers despite the use of the best personal protective equipment, she said. "They cannot fully protect themselves from those risks."

Righting a wrong
Firefighters have workplaces like no other Australian workers. "It is a workplace that in fact cannot be controlled," Senator Abetz said.

Labor Senator Gavin Marshall, who chaired an inquiry into the new laws, said the new laws would not establish new rights but would "right a wrong." It was "right and proper" for the Parliament to recognise the greater risk firefighters had of contracting cancer after exposure to deadly chemicals, he said.

Firefighters in the public gallery stood and applauded as the Safety, Rehabilitation and Compensation Amendment (Fair Protection for Firefighters) Bill 2011 was passed.