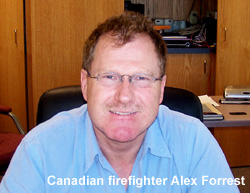 The UFUA bid to have cancers recognised as occupational diseases for firefighters is a step closer with the commencement of the Senate Standing Inquiry into the 'Fair Protection for Firefighters Bill'.

The Bill proposes a presumptive legislation approach, so that if a firefighter is diagnosed with one of the listed cancers, and has been employed for the stipulated qualifying period, it is presumed that cancer was caused by their duties as a firefighter, and assistance, work cover and compensation follows.

Today, the Senate Inquiry was in Melbourne to hear submissions. They heard from Canadian firefighter Alex Forrest, an expert in presumptive legislation for cancers as occupational disease in firefighters. Alex is  President of the Winnipeg Fire Fighters Union - and a lawyer. He has been directly involved in getting similar legislation passed in seven of the 11 Canadian provinces, a number of states in the USA and is currently working with other countries to follow suit.