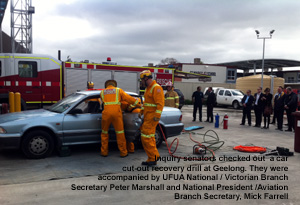 On August 11, Senators Gavin Marshall (Victoria) and Chris Back (Western Australia) visited Geelong Fire Station as part of the investigation into the 'Fair Protection for Firefighters' Bill. A Senate standing committee is currently inquiring into this Bill which proposes presumptive legislation; i.e. if a firefighter is diagnosed with one of the listed cancers, and has been employed for a stipulated qualifying period, it is presumed cancer was caused by their duties as a firefighter, and assistance, work cover and compensation will follow.

The Senators were in Geelong to gain a better understanding of the diverse role and the demands placed on firefighters at work.

Senator Marshall and Senator Back were shown the five categories of personnel protection equipment, fire demonstrations (including a fuel spill) and a car cut-out recovery.

It was then time for the Senators, their advisors and Senate Committee staff to don PPE and safety equipment before being raised 42 metres in a ladder platform. 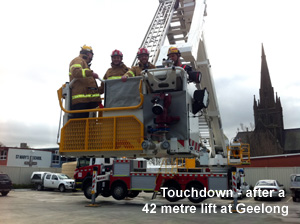 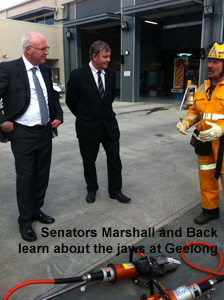