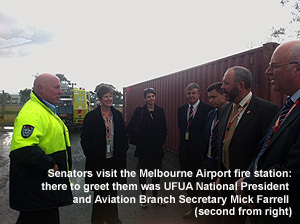 As part of the investigation into the Senate 'Fair Protection for Firefighters' Bill, members of the Senate Standing Committee on the Bill were keen to get a better understanding of the role of firefighters. On August 9, after hearing submissions in Melbourne, the Committee visited the Melbourne Airport Fire Station at Tullamarine.

Senators Gavin Marshall, Chris Back, Matt Thistlethwaite and Penny Wright were shown the station, trucks and equipment before taken to an outlying building where a hot fire rescue was demonstrated.