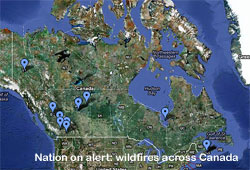 WA: Union questions fire management funds
The United Firefighters Union of Western Australia says funding, allocated to the Department of Environment and Conservation (DEC), will not ensure the state is properly equipped to fight fires.

NSW: Fatal flaw in cheap heat
It takes less than three minutes for a domestic heater to create a fatal fire, yet governments refuse to regulate cheap appliances. n the three months of winter, Australia's frontline firefighters see almost half of the 100 or so house-fire deaths each year, and the causes of this tragic loss of life are predictably the same.

Vic: Smart meters get OK in Dandenong
Local firefighters have played down concerns about smart meters, despite admitting dodgy installations could be a contributor to some fires.

WA: Fire crew shortage warning
Department of Environment and Conservation firefighters were undermanned by about 50 officers during last year's fires across the south west.

Vic: DPP appeals Black Saturday arson sentence
The Crown has lodged an appeal against the leniency of the sentence given to a former volunteer firefighter who lit a Black Saturday bushfire that killed 10 people.

Overseas
UK: Arsonists not prosecuted, but crews pursued to the end
The Fire Brigades Union has hit out at police and prosecutors after the two remaining firefighters charged with gross negligence manslaughter were cleared by a jury at Stafford Crown Court.

Canada: Major forest fires spread
After one of the driest winters, summer’s scorching heat has arrived in Canada, ushering in a new season of forest fires across the country.

USA: EPA grants relief for diesel engine fire trucks and ambulances
To meet the EPA emission standards, diesel apparatus produced after January 1, 2007 must have modified engine designs and exhaust systems with an after-treatment device (ATD) in place of the muffler and modified exhaust systems and tailpipes downstream from the ATD.

Canada: Fire dispatch needs broader thinking
It might seem like a no-brainer to have a single fire dispatch centre for all of Greater Victoria, but there is merit to having at least two facilities for the region.

USA: Worries about air tankers grow
".. forest fires are getting bigger and the air tanker fleet is getting smaller."