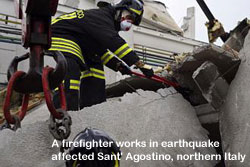 Australia
Vic: Make cancer compo possible
The ALP opposition and the Greens want the Baillieu government to make Victorian firefighters eligible for WorkCover if they contract cancers, like those employed by the Commonwealth who are now able to claim compensation.

QLD: EB round to start
The United Firefighters Union and the QFRS will soon commence negotiations for the next round of enterprise bargaining. The current wage policy of the LNP government is for up to a three percent wage increase.

WA: Budget boost
The government allocates $40 million for the Fire and Emergency Services Authority (FESA) in response to the damning Keelty report that revealed inadequacies in the service.
FESA moved to help hotel shortage.

WA: Independent body to oversee prescribed burns
The emergency services minister Troy Buswell has hinted that there will be money in the state budget for fighting fires.