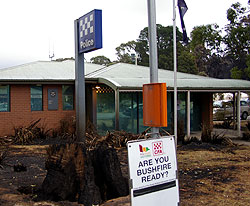 Australia's revered 'stay or go' bushfire policy failed catastophically during Victoria's 2009 Black Saturday inferno, reflecting the state's inability to manage such extreme events, according to a new analysis of evidence from the royal commission into the tragedy.

WA: Mistakes caused fire but no heads will roll- Premier
Mistakes were made during the prescribed burn that led to the Margaret River bushfire last November but no one will be sacked.

USA: IAFF fights bad pension bill that will hurt federal firefighters
The misnamed Securing Annuities for Federal Employees Act of 2012 will devastate the retirement benefits of federal employees while also forcing them to pay more for those reduced benefits. The Union states it case to the chairman and ranking member of the Senate Committee on Oversight and Government Reform Darrell Issa (R-CA), blasting the legislation.

USA: Architect charged over LA firefighter death
The architect who designed and oversaw construction of the Hollywood Hills mansion where a Los Angeles firefighter died has been charged with one count of involuntary manslaughter.

USA: Firefighters punished for getting injured
“It's about safety.” The Union is in the process of filing grievances for the disciplined firefighters.

USA: Firetruck monitors unnerve firefighters
Think of it as a black box for firetrucks: the devices track everything from braking speed to whether passengers are buckled in. If a driver violates the pre-set driving parameters, an alarm erupts in the cab and grows progressively louder until the activity ceases.