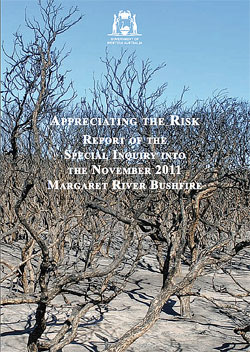 An inquiry into the Margaret River bushfire has recommended an urgent review of the Department. The report was scathing of the DEC's role in the fiasco - from its handling of the prescribed burn that started the bushfire, to its delayed and confused emergency response.

Auswide: Nation's hoarders top a million
Australia has more than a million hoarders a new study has found. "There are real risks of fire hazard ..."

UK: Cuts to fire alarm responses
Then fire authority councillors vote themselves a 25 per cent increase in their allowances. Meanwhile, fire crews face third year of a pay freeze.

NZ: Christchurch slow to rebuild quake-hit downtown
More than 10,000 New Zealanders stood in silence, some in tears, at a Christchurch park while police officers and firefighters read out the names of all 185 people who died.

USA: Virginia firefighters question cancer rate
More than 40 Portsmouth firefighters have died of cancer in recent decades -- most after retiring from the department.

UK: Outstanding pension issues
Although the Heads of Agreement details all the main parameters of the proposed scheme the major problems are still the contribution increases and the normal pension age.