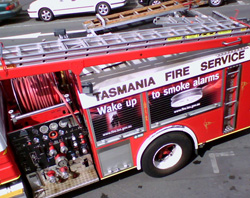 Tas: A fire safe community report
The UFU Tasmania Branch's report opposing the proposed closure of TasFire Training and the impact that planned budget cuts will have on the ability of the TFS to provide a fire safe community. Read the full report.
Fury over fire budget cut.

WA: Arson fears for fuel database
The creation of a public fuel load database revealing WA's most bushfire-prone areas, a key recommendation of the Keelty report, is in doubt because authorities fear it will become a roadmap for arsonists.

International
NZ: Fire Service attempts to shift blame for abhorrent treatment of staff
This is exactly the reason that there has been no resolution to the current industrial action and no settlement of the CEA. The Fire Service simply puts everything they can in the way of achieving a settlement.