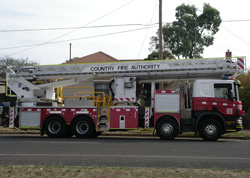 Firefighters are threatening to close a Country Fire Authority (CFA) training facility west of Melbourne unless there is an independent inquiry into a suspected cancer cluster there.The United Firefighters Union has asked the coroner to conduct an investigation.
Union urges firefighters to join push for coronial inquiry
South-west firefighters have been urged to support a push for a coronial inquiry into former practices used at Fiskville training centre, which are alleged to have triggered cancer.There are fears similar carcinogenic chemicals were also used at other training areas, including Penshurst.
Fiskville fire boss stays silent
The man who headed the Country Fire Authority when dangerous chemicals were stored at its training college says he will tell all only to a judicial inquiry. And the Herald Sun can reveal the CFA's board formally discussed the storage of dangerous chemicals at Fiskville at a meeting in 1990.
CFA did nothing about risks at Fiskville
A secret report has revealed the Country Fire Authority knew about dangerous chemicals stored at its main training centre more than 20 years ago but did not warn workers of any health dangers. Emergency Services Minister Peter Ryan said he expected the CFA would respond to the health concerns of Fiskville workers.
CFA knew of Fiskville dangers
The Country Fire Authority knew about the toxic chemicals stored at its Fiskville training centre more than 20 years ago but did not warn its workers of the dangers, a secret report claims.
Firefighters' critical of man appointed to head CFA probe into Fiskville
The head of a Country Fire Authority investigation into the use of toxic chemicals at its Fiskville training college has denied he has a conflict of interest. Prof Rob Joy and CFA chief executive Mick Bourke worked together at the Environment Protection Authority.The United Firefighters Union criticised Prof Joy's appointment because of the pair's relationship.

Vic: Rural tree change for MFB firefighters
Two long-standing members of the Metropolitan Fire Brigade have taken a break from the big smoke to join the smaller, self-sufficient team of the Mildura-based Country Fire Authority. The year long stint is part of a secondment program aimed at bringing the two agencies closer together.

WA: Botched solar panels a fire risk
Thousands of rooftop solar panels in WA pose a potential fire risk, according to a report by the State's electricity safety watchdog that highlights widespread defects in the quality of installations.

International
USA: Congress funds public safety program providing grants to communities to hire firefighters
Struggling communities will have access to $742.5 million in grants to maintain and improve public safety in neighborhoods across the country following approval by Congress of the 2012 Omnibus Appropriations.

UK: Pensions latest position - cost ceilings
The UK government has now issued a cost ceiling for the proposed Firefighters pension scheme. FBU officials are currently examining the government’s position and are preparing a response to the Fire Minister.

NZ: Collective Agreement negotiations
The Union has received the formal offer from the employer. However, the offer is significantly different from that the employer was proposing at the bargaining table. As well, there are many questions, points of clarification and omissions in the employer’s proposal to substantially resolve the Relieving Clauses.