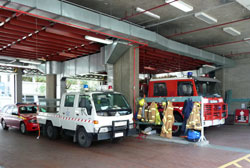 Australia
Vic: Brigade staff stop work
The workers, including administrative staff and mechanics who are responsible for the upkeep of firefighting vehicles, held a rally outside the MFB's city headquarters during a four-hour work stoppage today. United Firefighters Union state secretary Peter Marshall said the workers, among the lowest paid in their fields, were demanding a 4.5 per cent pay rise each year for the next three years.

WA: Budget expected to deliver more firefighting funds
The Western Australian Government is expected to use today's state budget to set aside more money to fight fires across the south-west.

WA: Why a day at the cricket left top cop exposed
The Keelty inquiry found the emergency response on the day suffered from a lack of co-ordination, and his report specifically found that the SECG should have convened earlier.
New office to sign off on all prescribed burns.

International
USA: House adopts budget plan that targets firefighters
The House of Representatives has brushed aside objections from the White House and the IAFF to endorse a budget plan that will result in significant cutbacks in fire protection and require federal fire fighters to pay more out of pocket to qualify for a pension.

UK: Lives are at serious risk over use of vans to replace fire engines
The vans – adapted Mercedes Sprinters called Rural Response Pumps – don’t have enough water in their tank to put out a fire in a single room in a house.
South Yorkshire fire crews raise major safety concerns over use of small fire units.

USA: Fire officials emphasise the importance of USFA re-authorisation
The budget authorisation for the USFA, established after the America Burning report of 1973, is set to expire on Sept. 30. Over the past several years, the agency's spending plan has been cut significantly.

Czech Republic: Finding money for firefighters
If government savings are adopted, the number of active fire-fighters will be reduced by at least two per county. Layoffs are to affect all, but mostly the 'wet' firemen, i.e. those who ensure call-outs. No cuts have been tabled for investigators, prevention officers and other specialisations.

USA: Goats to combat wildfires
Corralled by a portable electric fence, the goats are part of a deliberate plan by the Big Rock Homeowners Association to manage the thick brush that covers the Santa Monica Mountains.