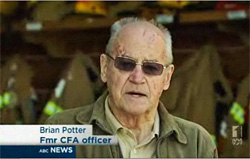 The UFU is shocked a senior officer who blew the whistle on the cancer cluster concerns at at a CFA training facility west of Melbourne, has had his compensation claim rejected. UFU Victorian Secretary Peter Marshall says the CFA failed to make a strong enough case to the insurer, on behalf of Mr Potter.
Ex-CFA chief's fight for compo.

NSW: Strike if cuts go ahead
NSW firefighters have voted to walk off the job if the state government cuts their workers compensation provisions and death and disability awards.
Thousands to protest NSW WorkCover changes.
Police exempt from WorkCover benefit cuts but not firefighters.
Firefighters, police fight job cuts.

Qld: Enterprise bargaining negotiations start
The United Firefighters Union meet with the Queensland Fire and Rescue Service to begin negotiating the Enterprise Bargaining agreement which covers career firefighters and communications officers. The UFU is also in discussions regarding an agreement for our auxiliary firefighter Members.

WA: Fire boss gets six-month holiday 'gift'
Taxpayers will foot a $70,000 bill for a dumped fire boss to enjoy six months of holidays. It comes as residents affected by last year's Perth Hills bushfires, which destroyed 71 homes, battle the Government for compensation.

NSW: Firefighters wary of communications overhaul
All New South Wales 000 calls will now be directed to either Newcastle or Sydney, a move being resisted by firefighters.

Qld: Firefighters efforts recognised
The work of Queensland Fire and Rescue Service (QFRS) firefighters during the 2011 Brisbane floods has been acknowledged by The Royale Humane Society of Australia.

NSW: 'New pumps aren't fit for Fireman Sam'
The fire service is going to introduce 16 vans known as rural response pumps. The Union said the change will put at risk the lives of both firefighters and the public.

International
USA: Diesel engine exhaust classified as a known carcinogen by IARC
The International Agency for Research on Cancer (IARC), part of the World Health Organisation (WHO), has classified diesel engine exhaust as a Group 1 carcinogen based on new evidence that exposure is associated with an increased risk of lung cancer. An IARC Group 1 classification means there is sufficient evidence that a substance causes cancer in humans.

UK: Essex fire crews vote two to one in favour of strike action
The dispute is over frontline cuts and changes forced through without proper negotiation or agreement. Current plans for cuts would see the loss of one in five frontline crews in Essex since 2008, with the public already waiting longer for fire crews to turn up to fires in the home.