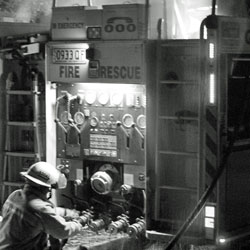 Australia
Qld: Count down to firecalls only

Vic: CFA reneges once again
In addition to reneging on 342 extra staff, the CFA is now attempting to roll out and commission specialist appliances without any genuine consultation as required by the current enterprise agreement.

WA: O'Callaghan steps down
The Police Commissioner Karl O'Callaghan is stepping down as chairman of the State Emergency Management Committee.

NSW: Griffith councillor defends RFS decision
The Shires Association says its relationship with the Rural Fire Service (RFS) has been deteriorating and this week councils voted to set up a working party to investigate how to relinquish all involvement in rural firefighting.

SA: New CFS trucks - safer and more powerful
Eleven new Country Fire Service (CFS) trucks have arrived in South Australia and a further 12 are on the way. The $300000 appliances are going into service across the state, after being built by a New Zealand company.

Qld: Flood victims families want judicial inquiry
Mr McGuire said some of the timings in the coroner's report were wrong, and that the Queensland Fire and Rescue Authority were withholding information he had requested.

International
USA: Ruling clears way for 9/11 health fund to cover cancers
A federal health official’s ruling has cleared the way for 50 different types of cancer to be added to the list of sicknesses covered by a $4.3 billion fund set up to compensate and treat people exposed to the toxic smoke, dust and fumes in the months after the September 11, 2001, terrorist attack.
Read the New York Times report.

NZ: Servicing decision ignores Members' wishes
The Fire Service has purchased new BA sets for all of the country. They have decided, against the wishes of the Union and their members, to also utilise the supplier, Drager, for all testing, servicing and repairing of these sets.

USA: IAFF endorses Obama & Biden for re-election
This week, the Union Executive Board unanimously concluded that the choice of the next president of the United States is clear because of the stark contrasts between the candidates.

UK: Essex fire crews call on Fire Chair to step in
They want Councillor Tony Hedley, Chair of Essex Fire Authority, to step in and break the deadlock in the bitter fire dispute over unnecessary frontline cuts and changes imposed without agreement

USA: Firefighters' Union fights sick bank rejection
The sick bank is a way for firefighters to donate their overtime accruals so that co-workers who face extensive medical absences can still be paid.

USA: White House press gaggle
The President, back in September, laid out an American Jobs Act that included proposals that ... included a proposal to put teachers, firefighters and police officers back to work.