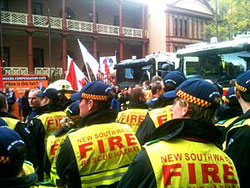 Qld: EB negotiations update - we won’t accept a sub-standard agreement
The state government has changed the industrial laws to advantage them during bargaining and arbitrations. They have embarked on a job threatening agenda and scare campaign designed to incite the public against public sector work. The Union says we will take whatever time is needed to ensure we get a fair package.

ACT: Fire services 'out of pocket'
The ACT Government has accused the Commonwealth of short-changing the Territory for firefighting services provided to Canberra's national institutions.
Feds leave the capital with $6m black hole.

NSW: New roster risks 'not being considered' warn councillors
Mid and West Wales Fire Authority are pushing ahead with the controversial plans, which are expected to see full-time firefighter numbers in Llanelli slashed by half to 13.

USA: Fire retardants controversy as new rules target contamination
Firefighters say regulation to avoid killing protected species won't pose problem as wildfires spread.The agency rules, that resulted from a lawsuit, require drops to come no closer than 300 feet from streams and lakes except when human safety is at risk.

UK: Coroner’s inquest into 2010 firefighter deaths begins
“Firefighting can never be a health and safety free zone, quite the opposite. The more dangerous the working environment the greater standards of health and safety are required to stay safe..."

NZ: Times changing for firefighters
"We're struggling a bit for volunteers in the Far North at the moment..."

US: Firefighters remembered in anniversary of Charleston tragedy.
On June 18, 2007, nine South Carolina firefighters died in the line of duty while battling the Charleston Sofa Super Store fire.