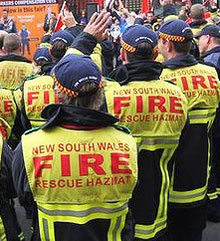 The Union is due to meet with NSW Emergency Services Minister Michael Gallacher in a last ditch effort to avoid a dispute about overtime blowouts heading back to the industrial umpire.
NSW firefighters to head to Commission.

International
USA: Philadelphia mayor will appeal firefighter pay award
The Union sued in state court in Philadelphia, asking a judge to force the city of 1.5 million to implement the arbitration award. “The city doesn't respect us,” Bill Gault, president of Local 22 of the International Association of Fire Fighters.
Thousands of firefighters march on City Hall to protest contract.

Russia: Marooned Firefighters pray for rain
A team of firefighters marooned in a burning forest hundreds of kilometers from help have been told to stay put in case they walk into a 'ring of fire'. The 40 men battling forest fires in the Yenesei district of the Krasnoyarsk region have been without food.

UK: FBU attacks government inaction on flood response
The Fire Brigades Union attacks a government decision to risk public safety in England and Wales by refusing to require fire and rescue services to respond to flood emergencies, despite the wettest June on record.

USA: California prepares for harsh realities of changing climate
Ken Pimlott, director of the California Department of Forestry and Fire Protection, said firefighters know the impacts of climate change from fighting more frequent and intense wildfires on the ground. "These are not changes we're talking about in the future - these changes are... We need to get ahead of the fires before they occur. Public education is key."

USA: US Forest Service rejects firefighting aircraft study
The U.S. Forest Service is dismissing a study it commissioned that recommends a major overhaul in its approach to fighting wildfires, suggesting swapping out expensive retardant-dropping air tankers in favor of less costly water-scooping planes. The study comes as federal officials are scrambling to replace their fleet of large firefighting planes, which are increasingly showing their age.