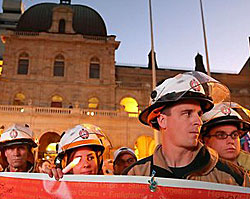 The UFU is worried that fire stations will be closed due to state bovernment budget cuts.
Qld emergency workers launch campaign.

ACT: We will protect you
Response times are critical to saving lives, but apparently firefighters must leave our response areas to sit in a classroom in Hume with two or three appliances at a time ... leaving Canberra's families under-protected.
Union to launch fight over closures.
Facility opens room to fight fire.

NSW: More deaths if fire stations shut says opposition
The NSW opposition says there could be more house-fire fatalities if the government shuts down fire stations.
Kids fighting with fire.

International
UK: London’s fire engine fleet - bought and sold
AssetCo, the company which owned and controlled all London’s fire engines, has sold them to investment company AB&A in order to help pay its debts. The Union says London Fire Brigade and the Fire Authority have handed over control of the fire service to hedge fund managers.

NZ: Freeloader on fire levies
The Union says the Government, which has just announced a review of the way the Fire Service is funded, is the biggest freeloader on the service.

USA: Black firefighters march in downtown Seattle
It's important to recognise the struggle for acceptance.

USA: Firefighter killed as wildfires rage
A firefighter was killed in Idaho and another firefighter in Oregon suffered burns after she had to deploy her emergency fire shelter as bush fires continue to rage across the western United States.

Spain: Wildfires claim lives of two firefighters in Spain
Two firefighters have died from injuries sustained in battling a wildfire in the eastern province of Alicante while hundreds were evacuated by boat to escape a fire raging on the Canary Island of La Gomera.