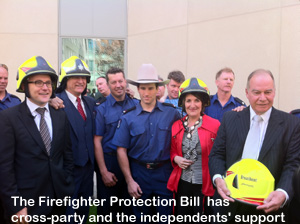 After many months of hard work by the National Executive and the National Office, Australia’s House of Representatives have now unanimously agreed to the Safety, Rehabilitation and Compensation Amendment (Fair Protection for Firefighters) Bill 2011.

Most importantly the Bill was also amended to include additional cancers which are as follows:multiple myeloma, primary site prostate, ureter, colorectal and oesophageal cancer.

Please note lung cancer will be dealt with separately by way of Regulation once it is agreed on a definition of ‘non-smoker’.

Cross party support
As members would be aware the legislation was originally introduced to Parliament by Adam Bandt of the Greens and co-sponsored by Maria Vamvakinou of the Australian Labor Party and Russell Broadbent of the Liberal Party of Australia and seconded by Independent MP Bob Katter. In addition the Bill has had support from all parties including the Nationals, and all Independent MP’s including Rob Oakeshott, Andrew Wilkie and Tony Windsor.

It is important to note that cross party support for Australian firefighters was greatly assisted by the extensive evidence and findings of the Senate inquiry in relation to this matter. All those who participated are to be congratulated.

Senate next step
As the Bill has now been unanimously agreed to by the House of Representatives, the legislation will now be referred to the Senate for ratification.

Congratulations
On behalf of the National President, National Executive, and the National Office, we congratulate each and every firefighter, family member and friend who assisted in making this possible.

Further, this outcome is indicative of what a unified National Union can achieve when we work as a collective force, for the betterment of the members we represent.

Thanks
Finally, a special gratitude is extended to our Global Alliance partners, in particular United Fire Fighters of Winnipeg President and IAFF Canadian Trustee Alex Forrest, the distinguished Fire Chief Ken Block of the Edmonton Fire Service, and of course the General President of the IAFF Harold Schaitberger.

More information will follow, and copies of the debate and voting will be available in the near future. In the interim, if you require any further information, please contact Peter Marshall on 0419 127 004.

STRENGTH IN UNITY
AUTHORISED BY THE NATIONAL SECRETARY PETER MARSHALL