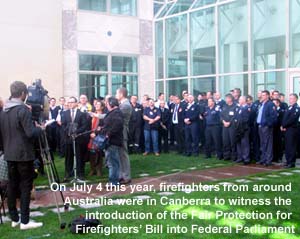 The Senate Standing Committee which has been investigating the Fair Protection for Firefighters Bill has released its report and recommends presumptive legislation be passed to compensate Firefighters with occupational cancer and to extend the coverage to 14 cancers.

This will bring Australian Commonwealth legislation in line with contemporary scientific evidence and international law.

This report confirms what firefighters and the UFUA has always known – that firefighters have a higher risk of some cancers due to the exposure of toxins and carcinogens during firefighting.

Endorsement
The report was endorsed by the Senate Standing Committee but a minority of two Coalition Senators have questioned whether presumptive legislation is the mechanism to use.

The UFUA will meet with a Coalition policy committee to ensure they understand that presumptive legislation has been proven to be the most effective way of ensuring firefighters access their entitlements. It is pleasing to see the Coalition Senators have endorsed the relationship between firefighting and cancer as an occupational disease.