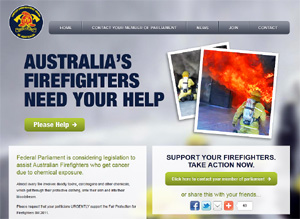 In response to the thousands of letters that have been sent to politicians through the protectyourfirefighters.com website, opposition Coalition politicians have said they will not be opposing the Fair Protection for Firefighters Bill.

Numbers of Coalition Members of Parliament and Senators have emailed responses back to firefighters and UFUA Union officials declaring they will not vote against the Bill.

The Greens and Independents support the Bill and with the Coalition now saying it will not oppose it, we are just waiting to see what Labor’s position will be.

Opposition email
The following is an email from Senator Eric Abetz, the Leader of the Opposition in the Senate:

"Thank you for your email concerning the Fair Protection for Firefighters Bill.  I am responding on behalf of the Tasmanian Liberal Senate Team including Senators Parry, Colbeck and Bushby.

The Coalition has considered the issues raised including the overseas experiences.

Whilst firefighters do have access to workers compensation it has proven difficult to pursue some claims because of the unique nature of their “workplace”.  They can never be sure as to what cocktail of toxins they will be confronting.

The Coalition appreciates and understands these concerns.

Similarly the Coalition understands the concerns of those who believe that resorting to presumptive legislation – as is being proposed – is not in principle the most desirable way to achieve the desired outcome.

Taking all matters into account the Coalition has decided not to oppose the legislation – in other words, it should pass the Parliament.

Your support for our firefighters is appreciated.