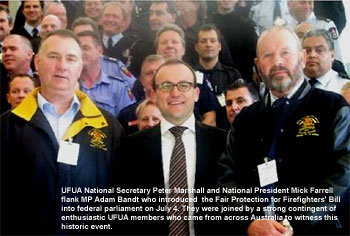 A Senate Standing Committee will inquire into a Bill which proposes presumptive legislation to recognise seven cancers as occupational disease for firefighters. Today, the Senate referred the Safety, Rehabilitation and Compensation Amendment (Fair Protection for Firefighters) Bill 2011 for inquiry and report.

Scientific studies have shown links between the absorption of toxins and carcinogens through the skin of   firefighters who attend fire scenes and the contracting of some cancers. This means these cancers are occupational diseases for firefighters, who, as a result, should be entitled to WorkCover protection and compensation. However, firefighters have been denied these entitlements as it has been difficult to prove which fire or fires caused cancer.

The UFUA has campaigned for many years to have the cancers recognised as occupational diseases. This goal became a real possibility when Members of Parliament Adam Bandt (Greens), Maria Vamvakinou (Australian Labor Party) and Russell Broadbent (Liberal Party) co-sponsored the 'Fair Protection for Firefighters' Bill in the House of Representatives yesterday. About 100 firefighters from every branch of the UFUA were at Parliament to witness this historic event.

This Bill proposes a presumptive legislation approach, so that if a firefighter is diagnosed with one of the listed cancers, and has been employed for a stipulated qualifying period, it is presumed that cancer was caused by their duties as a firefighter, and assistance, WorkCover and compensation will follow. It is a 'rebuttable presumption' which means an employer or insurer can contest the presumption but it will be up to them to prove that firefighting could not be the likely cause of the cancer.

The Bill amends the Safety, Rehabilitation and Compensation Act of 1988 which covers firefighters in federal jurisdictions.