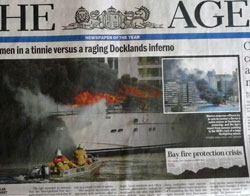 Melbourne firefighters say the lack of a purpose-built boat to tackle fires on the city's waterways is endangering lives.

Firefighters call for boats after Docklands fire
The Firefighters' Union secretary said the MFB Board should be sacked if it does not buy a firefighting boat.

Firefighters battled Melbourne boat fire with a hose and a tinny
Firefighters will be ill-equipped to tackle major marine fires in Melbourne for at least another year, the city's fire chief says.
Two men in a tinnie versus a raging Docklands inferno.
Melbourne boat blaze too big: fire chief.

Tas: Fire service sued by Myer
THE State Fire Commission is facing a massive damages claim after Myer delivered a scathing assessment of its role in the devastating $50 million blaze that destroyed its historic Hobart city-centre site in 2007.
Myer seeks damages over shop blaze.

WA: Firefighter warns of bushfire disaster
Conditions were becoming so extreme in WA that authorities would soon be facing fires that could not be fought. "About 40 per cent of the major fires that have occurred since 1937 have occurred in the last 10 years... "

International
NZ: Hydrocarbon fridge engineers should be licensed - Tamahere coroner
THE coroner who conducted the inquest into the death of the New Zealand firefighter killed in the 2008 Tamahere coldstore explosion has called on the New Zealand government to introduce a licensing scheme for refrigeration engineers who install or handle hydrocarbon refrigerants.

UK: Unions considering next steps over pension’s measure switch
The Court of Appeal has today rejected the appeal brought by PCS, POA, FBU, NASUWT, UNITE and Unison in relation to the switch in indexation from RPI to CPI for public sector pensions.

USA: Union says Baltimore closures threaten public safety
For the past several years, the Fire Department has sacrificed to help abate the city's budget woes by dealing with rotating closures. Now, the Mayor is asking Fire Chief James Clack to choose three fire companies to shut down for good.

UK: Wiltshire firefighters warn of irreparable damage to service
Cuts would affect crews' ability to carry out rescues and achieve their objectives; the creation of 96-hour shifts for firefighters when based at their fire station and unable to leave, except for emergencies.