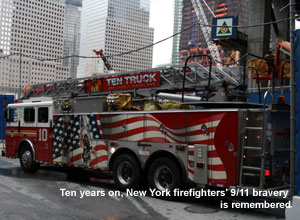 Australia
National: Senate inquiry reports
The Senate Standing Committee which has been investigating the Fair Protection for Firefighters Bill has released its report and recommends presumptive legislation be passed to compensate Firefighters with occupational cancer and to extend the coverage to 14 cancers.

WA: New head of fire authority appointed
An Assistant Police Commissioner has been appointed head of the Fire and Emergency Services Authority with a 12 month contract from the State Government. This follows the resignation of the former CEO who stepped down after the release of a damning report on the Perth hills' bushfires which destroyed 71 homes.
MPs to probe FESA blaze claims
A parliamentary committee to investigate how evidence contradicting scathing findings against the Fire and Emergency Services Authority failed to make it into the final report that triggered the authority's restructure.
Serious doubts over fire report
The only thing more disastrous than FESA's response to the February bushfires in the Perth Hills is the Barnett
Government's response to Mick Keelty's review of FESA. Read the full FESA Report

WA: Police investigate radioactive threat from crash
Fire crews have managed to safely secure a radioactive load at a truck crash, north-east of Perth ... tests at the site revealed the material is a radioactive isotope used in industrial operations.

UK: The Fire Brigades Union welcomes restructure
The government plans to form the current eight fire and rescue services into a single structure. The FBU believes this gives clarity and a focus for the service.

USA: Why firefighters die
The FDNY has battled a quarter of a million structural fires since the attacks of 9/11. And it has lost 11 firefighters in the line of duty doing so. A City Limits Magazine investigation looks at FDNY Firefighter fatalities over 20 years, finding common factors ...

UK: FBU pensions campaign latest
The government wants firefighters and other public sector workers to pay more, work longer and still get less for our pensions. The FBU says this is daylight robbery.

USA: New York, September 11: Ten Years Later
It’s been 10 years since the terrorist attacks on September 11 that claimed the lives of 343 FDNY members. Every day since the terrible tragedy, the IAFF has made sure the fire fighters lost that day are always remembered and never forgotten.(IAFF)

Nation looks ahead with hope after remembering 9/11 victims
Eight miles north of ground zero, New York firefighters held their own memorial at Riverside Park ... with thousands of firefighters from around the nation in attendance as well as some from as far away as Germany and Australia.

I-beam from World Trade Centre site provokes emotional reactions
The famed Fire Company No. 10, which lost more firefighters than any other, on a day in which 343 firefighters and emergency medical technicians lost their lives.

An angel in the rubble
At the 42nd floor, they meet firefighters on their way up. ... Guzman-McMillan can't remember ''Paul'' letting go and the fireman taking over. ...

200 Chicago firefighters honor 9/11 victims in NYC
When asked how many people he knew that died on 9/11, Western Springs Fire Department Officer Jim Regan replied: "I knew 17 firefighters and officers and 5 of them were very close friends of mine."

This is a day to remember what we stand for
Sergeant James Canham was a New York fireman who was sent to the World Trade Centre on September 11, 2001.

Canadians help close police, fire games in New York amid spectre of 9/11
In fact, on this week leading up to the 10th anniversary of the 9/11 terrorist attacks that devastated New York and Washington, D.C., there was much noting by speakers of the significance of having police officers and fire fighters from 67 countries visiting the city to meet, mingle and compete against their local departments.

USA: Presidential campaign:
IAFF says Obama's plan will create jobs, boost national security
As part of his jobs plan, the President proposes providing $1 billion in the form of federal grants to municipalities across America to rehire firefighters whose jobs have been eliminated, prevent further layoffs and fill positions that have been left vacant due to lack of funding.
In Rick Perry's Texas, firefighters are forced to pay
In Texas, firefighters aren't just battling the wild fires raging around Austin and Houston ... In some cases, fire officials say, firefighters have had to pay out of pocket for basic necessities like proper protective gear and fuel to get them to the scene.