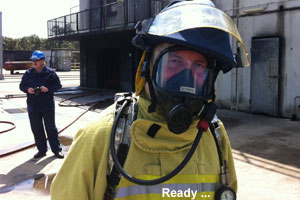 The historic firefighter presumptive national legislation inquiry has completed its hearings with senators trying hot fire training in Brisbane before hearing of firies’ and their families experiences with cancer at the final hearing in Perth.

Step closer
The UFUA campaign for legislation to recognise cancers as occupational diseases for firefighters is another step closer with the Senate Standing Committee inquiry wrapping up in Perth on Friday (September 2).

This phase of the campaign began with about 100 firefighters from every branch of the UFUA (Queensland, NSW, ACT, Victoria, SA, Tasmania, WA and Aviation) witnessing the historic moment when the “Fair Protection for Firefighters’ Bill was introduced into the House of Representatives on 4th July 2011.

The details
The Bill, if enacted, will amend the Federal Comcare legislation and will provide that if a firefighter is diagnosed with stated cancers, it would be presumed that the cancer was contracted as a result of the duties of firefighting.  The cancers covered in the Bill are brain, bladder, kidney, breast, testicular, leukemia and non-Hodgkin’s lymphoma.  This will mean that firefighters covered by the Act will be able to access assistance and compensation just like any other work injury.

History in the making
The introduction of the Bill was an historic and sobering moment as it was the first step in having legislation to recognise that cancers are an occupational disease for firefighters.  Some of the firefighters present had been diagnosed and treated for cancer.  All were thinking of those that had gone before them.

It was also a historic moment for the House of Representatives as it is believed it was the first time a Bill was introduced into the House with support from all major parties.  The Member for Melbourne Adam Bandt (Australian Greens) introduced the Bill which was co-sponsored by the Member for Calwell Maria Vamvakinou (Australian Labor Party) and the Member for McMillan Russell Broadbent (Liberal Party of Australia).

The Bill was then moved to the Senate for a Senate Standing Committee inquiry chaired by Senator Gavin Marshall (Victoria, Australian Labor Party) with deputy chair Senator Chris Back (Western Australia, Liberal Party of Australia) to investigate the implications and merits of the Bill.

Read all the details in the UFUA's latest National Bulletin (Authorised by UFUA National Secretary Peter Marshall: please read out at Muster and put on Notice Boards).