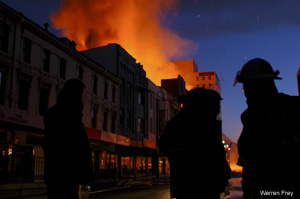 has been thrown into doubt following a court decision. Justice Alan Blow has ruled that the fire service's immunity under state legislation covers the events surrounding the September 2007 disaster.

Qld: QFRS roster staff strike in support of campaign
Rostering officers at the Queensland Fire and Rescue Service (QFRS) begin a 24-hour strike to protest against cuts to their working conditions. It comes as the United Firefighters Union (UFU) conducts a ballot of members to gauge support for further industrial action - including 'enforcing emergency calls only'.
Brisbane firefighters set to strike.
Brisbane region roster officers stoppage.

Vic: CFA rego blunder blamed on 'system error'
Victoria's Country Fire Authority (CFA) is investigating why more than 20 of its vehicles, including firefighting tankers, were found to be unregistered.

Qld: Stand with us
Every day, Queensland Ambulance Officers and Firefighters are looking after our community. Now we need Queenslanders to stand with us to ensure we get a fair deal.

NZ: Fears over adequacy of new fire truck
The New Zealand Fire Service plans to replace the only long-ladder and large pump truck in the Wakatipu with a smaller truck with about half the capability.

USA: IAFF fighting back
IAFF members are being targeted by political and legislative threats like never before. None of us can afford to sit back while our opponents launch these assaults.