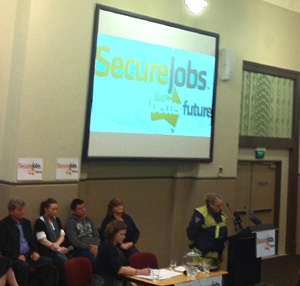 Secure Jobs and a Better Future

Australian unions have launched a major national campaign for secure Jobs and a better future for Australian workers.

NSW retained firefighter Marina Findeis helped the ACTU at its Sydney launch of this critical mobilisation for job security and workplace rights.

The Australian economy is performing well, yet the unemployment rate stands at 5% and 40% of Australian workers are now employed in contract and casual work. These workers have little or no job security, have no rights to take holidays or sick leave, are paid varying amounts each week and often have little control over when they work or for how long.

“Given the strength of the Australian economy and decades of sustained economic growth, there is no justification for why the proportion of the workforce with insecure jobs is so high," says Ged Kearney ACTU President.

What you can do
You can help the Unions' campaign for Secure Jobs and a Better Future for all working Australians by going to the campaign website and signing up. You can also find out how to help spread the word on Facebook and Twitter.

Why you should act
The vulnerability and uncertainty of casual or contract work has a major impact on family life. It puts additional stress on households already stretched to keep on top of mortgage repayments or rent, groceries and electricity bills.
Many casual employees strike difficulty when applying for a car or home loan because of their insecure employment. Large numbers of parents can’t take up childcare opportunities because the inconsistency of their working hours makes it impossible to plan their lives.

“Insecure workers have told us they want a job they can rely on. This campaign will speak up for this large, often disenfranchised sector of the workforce and work towards change for the better,” says ACTU President Kearney. “Insecure work is about employers creating a way to shift costs from employers onto workers and it is spreading into sectors that were once seen as havens for permanent and secure jobs, like education, manufacturing and construction. But workers want a job they can rely on. And you can’t rely on insecure work.”

The business line
Business says that casual work gives you a choice. That’s true for some people who don’t want a long-term job. But for many more Australians, casual work is not a choice – it is all they can get.

More than one million contractors are still employed casually after a year in the job and another 15%  have been in their job for more than five years. They earn on average over 20% less than permanent full-time workers over a 35 hour week and can be sacked at short notice with no redundancy pay.

There are high numbers of casual labourers, chefs, waiters and bar staff.  Even 16% of teachers are now on short-term contracts with no job security. These workers should be entitled to the same rights, entitlements and certainty as their permanent colleagues doing the same job. They should have the choice of permanency so they can better plan for their future.

All workers should be sharing in the benefits of a strong Australian economy - and the right to certainty at their workplace.

Join the campaign
Join the fight for Secure Jobs and a Better Future for all Australians. Go to thecampaign website and help out now.