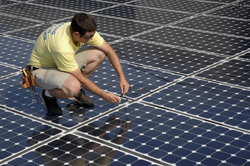 The UFUA's National Secretary, Peter Marshall said the risk posed by solar panels had been a growing concern in recent years. Now, the Australian Fire and Emergency Service Authorities Council (AFAC) has launched an investigation into the alternative energy source's safety after Firefighter claims that homes fitted with panels could remain live with electricity after mains power is cut.

Cancer relief at hand for firefighters
Legislation that gives firefighters access to workers' compensation if they are diagnosed with brain, bladder, kidney, breast or testicular cancer, non-Hodgkins lymphoma or leukaemia passed its first hurdle in federal parliament on Thursday. ‎Australian Greens MP Adam Bandt, who co-sponsored the bill, says it is "potentially only weeks away from becoming law".

New law a homage to fireys who died
Melton resident, firefighter and cancer survivor Barney Miller, who is based in Sunshine, said the new law paid homage to those who had died.
‎
Qld: Super payments on TEM earnings update
The Tax Office advice is yes.

NT: Storms bring relief for Red Centre firefighters
‎Storms across Central Australia bring relief to those fighting fires that have been raging throughout the region over the past couple of months.

International
NZ: Firefighter Collective Agreement campaign latest
The Union has met with Fire Service representatives in mediation talks with the assistance of a Labour Department mediator.

USA: Vote for public safety jobs
The IAFF campaign asks voters to urge Congress to invest in the SAFER grant program and get firefighters and paramedics back to work in their communities. Nearly 15,000 firefighter and paramedic positions have been lost because of the economic downturn. View the advert created for the campaign.

USA: Firefighters from around the world at Notre Dame
‎Hundreds of firefighters, some from as far away as Australia, are in Michiana this week. They've converged on Notre Dame, where they'll be learning and sharing new ideas about fighting fires in the modern world. Many developers have shifted from building 'legacy homes' to more 'light weight' construction that presents new challenges for firefighters.