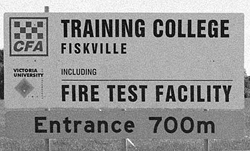 CFA rapped over Fiskville inquiry
THE CFA should be ashamed for refusing to investigate a link between the toxic chemicals used at its Fiskville training college and a suspected cancer cluster, alleged victims say. The investigation can look at "historical facts", documents, current risks and origin of the chemicals, but not whether they are linked to the deaths of 15 people who worked and trained there or those who are sick.

Firefighters want inquest
THE Firefighters Union wants the coroner to probe fears trainees were exposed to carcinogens that may have contributed to 15 deaths. "We do not understand why neither the CFA nor the Government has referred this matter to the Coroner for investigation," UFU secretary Peter Marshall said.

Smoke and fire over Fiskville
The best that can be said for the CFA inquiry into dangerous chemicals used in training fires at Fiskville is that it will spark a full and independent investigation. As it stands, the Country Fire Authority investigation will do nothing to establish any link between the chemicals and what families fear may be a deadly cancer cluster. (Herald Sun editorial)

CFA unveils details of cancer probe
A Country Fire Authority (CFA) investigation into cancer-causing chemicals stored at a training base will explore whether documents that warned of potential dangers were ignored. Some 17 former firefighters and their family members now claim they have developed cancer from exposure to the chemicals in the 1970s and '80s.

Firefighters union calls for Fiskville cancer probe
"We make no criticism of current CFA management who have initiated an internal inquiry," Mr Marshall said today. "However, an internal inquiry is not appropriate for an issue of this seriousness. An internal CFA inquiry cannot determine the circumstances by testing evidence in a proper legal framework. The Coroner has the power to investigate any fire or reportable death."

Call for coroner to probe toxic exposure at Fiskville
The United Firefighters Union wants the State Coroner to investigate the possibility that use of toxic chemicals at Fiskville may have contributed to 15 deaths.

Union wants court to probe Fiskville cancer claims
The United Firefighters Union says its legal advice supports its call for a coronial investigation into claims Country Fire Authority trainees were exposed to carcinogens at the Fiskville facility near Ballan. There are allegations up to 17 people have suffered cancer since training at the centre in the 1970s and '80s. The Union's National Secretary, Peter Marshall, says the claims are too serious to be handled solely by an internal investigation.

Doubt already cast on Fiskville probe
The head of the inquiry into the Fiskville cancer scare has been accused of having a conflict of interest because he used to work with the Country Fire Authority's current boss. Rob Joy was deputy chairman of the Environment Protection Authority when Mick Bourke was its chief executive. Mr Bourke now runs the CFA.
United Firefighters Union National Secretary Peter Marshall said that the appointment of Prof Joy was "disrespectful" to the alleged victims of the cancer scare, and called for him to be replaced.

Dozens ponder legal action over Fiskville
A Class action could be launched against the CFA on behalf of those who believe they were affected by the use of toxic chemicals at Fiskville. Already 27 people have contacted law firm Slater & Gordon and at least 12 more have called Maurice Blackburn.